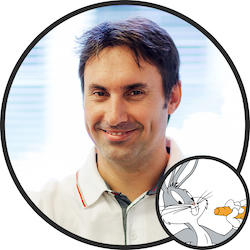 Hannes de Jager started carrying 5 ¼ inch floppy disks around even though he had no computer yet back in the day. At age fourteen he emerged himself into bits and bytes found on the 80MB harddrive of his brand new 80386 machine and soon found Turbo Pascal 5.5 with which he taught himself to program while losing lots of sleep due to it. Today, after exploring his keen interest in leadership too, he codes for bol.com, the largest online retailer in the Netherlands and Belgium. This same tech passion of his manifests there in different forms and in hobbyist projects at night. Originally from South Africa, he now lives in the Netherlands with his wife and twin preschoolers where he frequents on stroopwafels.